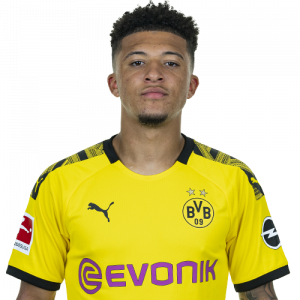 Jadon Malik Sancho (born 25 March 2000) is an English professional footballer who plays as a winger for German Bundesliga club Borussia Dortmund and the England national team.

A highly technical, creative player, he is known for his trickery, pace and use of feints in one-on-one situations.  He came runner-up for the 2019 Kopa Trophy and was nominated to the 40-man shortlist for the 2020 Golden Boy.

Previously a youth player with Watford and Manchester City, Sancho signed his first senior contract with Dortmund in 2017. In his second season, he established himself as a first-team regular and was named in the 2018–19 Bundesliga Team of the Season. Ahead of the 2019–20 season, Sancho won his first trophy following the DFL-Supercup victory over Bayern Munich.

Sancho was part of the England youth team that won the 2017 FIFA U-17 World Cup and made his debut for the senior team in 2018.

Sancho signed for German Bundesliga club Borussia Dortmund on 31 August 2017 for a fee reported to be in the region of £8 million and was immediately included in the first-team squad. He later stated that he felt confident in making the move abroad due to his previous experiences in relocating with Watford and Manchester City. Sancho made his debut for the club against Eintracht Frankfurt on 21 October, coming on as a substitute with six minutes left of the match, becoming the first Englishman to play a Bundesliga match for Dortmund. Sancho made his first league start for Dortmund on 14 January 2018, hitting the woodwork in a goalless draw with VfL Wolfsburg. He scored his first professional goal on 21 April 2018. It was the first goal in a 4–0 victory against Bayer Leverkusen in the Bundesliga and he also assisted two other goals in the same match.