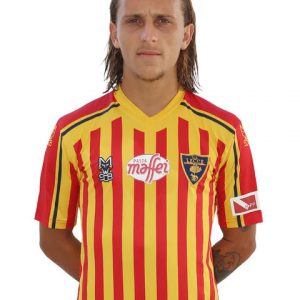 Jacopo Petriccione (born 22 February 1995) is an Italian football player who plays for Seria A side Crotone.

Born in Gorizia but of Caserta origins,  he began his career in the Cagliari youth academy, then moved on to the Siena youth academy and then to the Fiorentina Primavera, where he served as captain.  With the Viola reached the final for the Scudetto in 2015, lost against Turin.

On 26 August 2015 Pistoiese, a member of the Lega Pro, announced that they had bought Petriccione on loan from Fiorentina.  The team ends the season in twelfth place in the standings. In all, the player scores 2 goals this season, respectively against Savona and Carrarese.

For the following season, the player moved to Ternana, in Serie B. The official announcement arrives on July 15, 2016. The rossoverde club announces that it has bought the player on loan with the right to redeem and counter-redemption in favor of Fiorentina.  He scored his first goal in Serie B on the nineteenth day, in the match that ended 1-2 in favor of Vicenza. This will be his only goal of the season. The team ends the season in 18th place in the standings.

On 31 August 2017, Bari announced that they had acquired the player permanently from Fiorentina.  The purple company announces that it is entitled to a percentage of its future player sale.  He made his debut in the red and white jersey on the sixth day of the championship, against Ternana. He scores his first goal in red and white on the fifteenth day of the championship, away, against Novara. At the end of the season he remains free due to the failure of Bari.

On 3 August 2018 he signs a three-year agreement with Lecce, newly promoted to Serie B.  On 7 August he made his debut in the Giallorossi jersey in the second round of the Italian Cup, at home against Feralpisalò (1-0). Score his first goal with the Giallorossi on 23 March 2019, in the recovery of the twenty-second matchday of Serie B against Ascoli, in the home game won 7-0 by the Giallorossi. On 11 May 2019 he opened the scoring in the match won 2-1 against Spezia at Via del Mare, a success that earned the Salentini promotion to Serie A.  On 12 July 2019 he renews his contract with the Salento.  He made his debut in the top flight on August 26, 2019, in the 4-0 defeat at Meazza against Inter, valid for the first day of the Serie A 2019-2020 championship. Play a Serie A championship as a starter in Lecce, relegated at the end of the 2019-2020 season.

On 1 October 2020, after having collected a presence in Serie B and one in the Italian Cup with the Salento club, he is sold to Crotone outright. He made his debut with the Calabrians on October 17, in the league match drawn at home against Juventus (1-1).