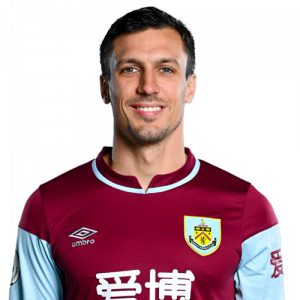 Jack Frank Porteous Cork (born 25 June 1989) is an English professional footballer who plays as a midfielder for Premier League club Burnley and the English national team. He played for the Great Britain Olympic team at the 2012 Summer Olympics.

Cork started off his career with Chelsea but between 2006 and 2011, he went on loan to a number of clubs, including Scunthorpe United where he was named player of the year. Without making an appearance for Chelsea, he signed permanently to Championship club Southampton in 2011 where he made over 100 appearances for them and helped them promoted to the Premier League by featuring in all their matches. Cork spent two and a half years with Premier League club Swansea City from January 2015 to July 2017 before his permanent move to Burnley where he featured in every match en route of the club qualifying to the UEFA Europa League.

Cork returned to Premier League club Burnley on 11 July 2017 on a four-year contract, for fee reported to be in the region of £8 million, rising to £10 million with add-ons. He scored his first goal on his return to Burnley in an EFL Cup tie against Blackburn Rovers on 23 August 2017. His first Premier League goal for Burnley came against his former club Swansea City in a 2–0 win on 18 November. That goal ended a run of 43 appearances without a goal for the player.

On 16 August 2018, he scored the winning goal in Burnley’s 1–0 victory over İstanbul Başakşehir in the Europa League qualifiers.