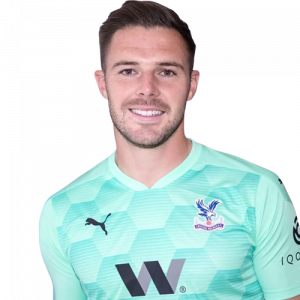 Jack Butland (born 10 March 1993) is an English professional footballer who plays as a goalkeeper for Premier League club Crystal Palace and the England national team.

Butland began his career with Birmingham City, and made his debut in the Football League in September 2011 while on loan to League Two club Cheltenham Town. Butland established himself as first choice keeper at St Andrew’s in 2012–13 and was transferred to Premier League club Stoke City in January 2013 for a fee of £3.3 million. He was loaned back to Birmingham and went on to play in every league match in 2012–13. Butland then spent time out on loan at Barnsley before making his Premier League debut in January 2014. He had loan spells with Leeds United and Derby County in 2014 before he became Stoke’s number one in 2015–16. Butland spent seven seasons at Stoke, winning their player of the year award twice. He joined Crystal Palace in October 2020.

At international level, he represented England at all age-group levels, playing for the under-17 team that won the 2010 European championships and for the under-20s at the 2011 FIFA U-20 World Cup. He was part of the England squad at UEFA Euro 2012, and later that year was the first-choice goalkeeper for the Great Britain team at the Summer Olympics. He became the youngest goalkeeper to play for the senior England team when he made his debut in August 2012.