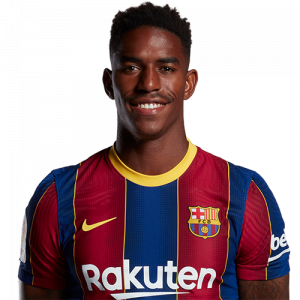 Mainly a left-back, he can also play as a centre-back or right-back.

Betis
Born in Santo Domingo, Junior moved to Benalmádena, Málaga, Andalusia at the age of six and joined Real Betis’ youth setup in June 2014, aged 18, from CD Puerto Malagueño. He made his senior debut with the reserves on 15 February 2015, starting in a 1–1 home draw against Granada CF B for the Segunda División B championship.

Definitely promoted to the B-side ahead of the 2015–16 season, Junior appeared regularly during the season, which ended in relegation. On 17 April 2016 he scored his first senior goal, netting the third in a 4–0 away routing of Algeciras CF.

On 1 August 2017, after spending the whole pre-season with the main squad, Junior renewed his contract until 2021. He made his first team – and La Liga – debut the following 12 February, starting in a 1–0 away defeat of Deportivo de La Coruña, becoming the first Dominican Republic-born player who have ever featured in La Liga.

Junior scored his first professional goal on 17 March 2018, netting the first in a 3–0 home win against RCD Espanyol. On 19 August, after being definitely promoted to the main squad, he agreed to a contract extension until 2023.

Barcelona
On 4 August 2019, Junior signed a five-year deal with Barcelona for €18 million plus €12 million in add-ons. He made his debut three weeks later in a 5–2 home win over his former club Betis, playing the last nine minutes in place of Rafinha. On 28 September 2019, Junior scored his first goal for Barcelona and the second goal against Getafe in 2–0 win.