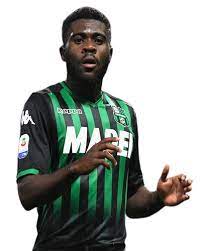 Jérémie Boga (born 3 January 1997) is a professional footballer who plays as a midfielder for Serie A club Sassuolo and the Ivory Coast national team.

Coming through Chelsea’s youth system, Boga spent the 2015–16 season on loan to Rennes and the 2016–17 season with Granada, also on loan, before making his first-team debut for Chelsea in August 2017. He then joined EFL Championship club Birmingham City on loan for the remainder of the season. In 2018, he moved to Italian club Sassuolo on a permanent deal.

Internationally, Boga represented his native France up to under-19 level, then chose to play for his parents’ country, Ivory Coast, at senior level. He is also eligible to represent England.

Sassuolo
On 21 July 2018, he moved to Sassuolo on a permanent transfer for a fee reported to be around £3.5 million.