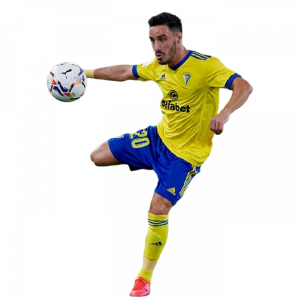 Isaac Carcelén Valencia (born 23 April 1993), commonly known as Iza, is a Spanish professional footballer who plays for Cádiz CF as either a right back or a right winger.

Born in El Puerto de Santa María, Cádiz, Andalusia, Iza was a Real Betis’ youth graduate. He made his senior debuts with the reserves in 2011, in Segunda División B.

On 1 July 2014, after being an undisputed starter for the B-team in its promotion from Tercera División, Iza renewed his contract for a further year, being included in the first team’s pre-season late in the month. He was also regularly used during the 2014–15 campaign, appearing in 33 matches and scoring two goals.

On 6 July 2015 Iza moved to Segunda División with Real Zaragoza, after agreeing to a three-year deal. He made his professional debut on 3 October, coming on as a half-time substitute for Rubén in a 1–0 home win against Deportivo Alavés.

Iza scored his first professional goal on 15 December 2015, netting his side’s only in a 1–3 loss at Gimnàstic de Tarragona. On 9 July 2017, Cultural y Deportiva Leonesa and Zaragoza reached an agreement for the transfer of Isaac.

On 21 July 2018, Iza signed for CF Rayo Majadahonda still in the second division. On 1 July of the following year, he agreed to a three-year deal with Cádiz CF in the same category.