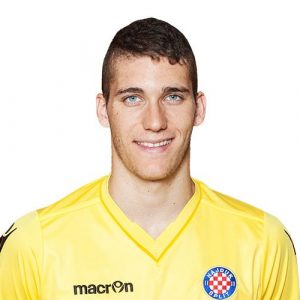 Ivo Grbić (born 18 January 1996) is a Croatian footballer who plays as a goalkeeper for Atlético Madrid in La Liga.

Born in Split, Croatia, Grbić moved to the Hajduk Split academy aged 9, where he remained for the rest of his youth career. A youth international since the U14 level, he has drawn high praise from experts such as Vladimir Beara At the beginning of the 2014–15 season he became the first goalkeeper of Hajduk Split II in the Treća HNL Jug. His first glimpse of first-team football was in October of the same year, when he acted as the reserve goalkeeper, but he only made his debut on 18 April 2015 in the home defeat to Rijeka, conceding two goals in the last 10 minutes of the game.

After lack of opportunities, Grbić became frustrated about his club status, thus eventually rejecting the contract extension and joining Lokomotiva in summer 2018. He made his debut for Lokomotiva on 28 July 2018 in a 4–0 victory over Inter Zaprešić. During 2019–20 season, Grbić played a key role in Lokomotiva’s run as they finished second in the Prva HNL and the Cup, qualifying for the Champions League second qualifying round.

On 20 August 2020, Grbić signed a four-year contract with Atlético Madrid in a transfer worth €3.5 million, including additional bonuses and a percentage of the next transfer. His first experience away from his homeland. He debuted on 16 December, in a Copa del Rey 3–0 victory over Cardassar. At his debut for the club, he maintened a clean sheet.