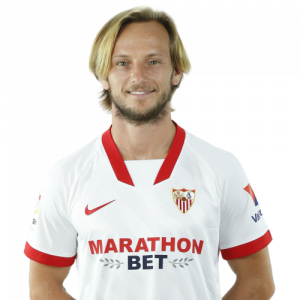 Ivan Rakitić (born 10 March 1988) is a Croatian professional footballer who plays as a central or attacking midfielder for La Liga club Sevilla.

Rakitić started his professional career at Basel and spent two seasons with them before he was signed by Schalke 04. After spending three-and-a-half seasons in the Bundesliga, he was signed by Sevilla in January 2011. Two years later, Rakitić was confirmed as the club captain and captained the team to UEFA Europa League triumph. In June 2014, Barcelona and Sevilla reached an agreement on the transfer of Rakitić. In his first season with Barça, he won the treble of La Liga, Copa del Rey and UEFA Champions League. He scored the first goal of the 2015 Champions League Final and became the first player ever to win the Champions League a year after winning the Europa League while playing for two clubs. After appearing in 310 games and winning ten more trophies with Barcelona, Rakitić returned to Sevilla in 2020.

Born in Switzerland to parents from Yugoslavia, Rakitić played for Switzerland at youth level, but decided to represent Croatia at senior level. He made his debut for Croatia in 2007 and has since represented the country at the UEFA Euro 2008, 2012 and 2016, and the 2014 and 2018 FIFA World Cup, reaching the final of the latter. He retired from international duty in September 2020, having made 106 appearances. At the time of his retirement, he was the fourth most capped player in the history of Croatia.

On 1 September 2020, Rakitić signed for Sevilla on a four-year contract, returning to the club after six years for a nominal €1.5m fee.

On 24 September, he played his first game for Sevilla after coming back, against Bayern Munich in the UEFA Super Cup in Budapest. He won a penalty after being tackled by David Alaba, which Lucas Ocampos successfully converted; however, Bayern came from behind to win the game 2–1 after extra time. Three days later, he scored his first goal since his return as Sevilla defeated Cádiz 3–1. On 10 February 2021, he scored a goal in the Copa del Rey semi-final to seal a 2–0 victory over his former club Barcelona.