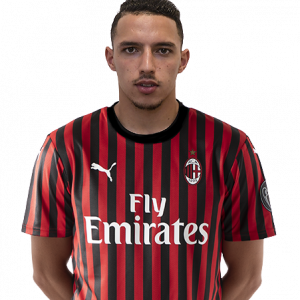 Ismaël Bennacer (born 1 December 1997) is an Algerian professional footballer who plays as a midfielder for Serie A club Milan and the Algeria national team.

Early career
After starting his career with French club Arles, Bennacer signed for Premier League side Arsenal in July 2015. He made his senior Arsenal debut in the League Cup fourth round away to Sheffield Wednesday on 27 October 2015, replacing Theo Walcott after 19 minutes, after the latter had already replaced the injured Alex Oxlade-Chamberlain in an eventual 3–0 loss.

On 31 January 2017, it was announced that Bennacer would join Ligue 2 side Tours on loan for the remainder of the 2016–17 season. He scored his first goal for Tours on 14 April 2017 against Sochaux from a free kick.

On 21 August 2017, Bennacer joined Italian club Empoli. In the 2017–18 Serie B season, Bennacer made 39 appearances and scored 2 goals as Empoli won the Serie B title, earning promotion to Serie A. Despite Empoli’s relegation the following season, Bennacer’s performances confirmed his status as one of the most promising young midfielders in Europe.

A.C. Milan
On 4 August 2019, A.C. Milan announced they had signed Bennacer from Empoli for a reported transfer fee of €16 million plus bonuses. He underwent his medical on 23 July and signed a five-year contract, with a reported salary of €1.5 million per season. He made his club debut on 25 August, coming on as a second–half substitute in a 1–0 away defeat to Udinese in Serie A; his home and full–debut came on 31 August, in a 1–0 victory over Brescia. On 18 July 2020, he scored his first goal for the club and in the Italian top flight in a 5–1 home win over Bologna in Serie A.