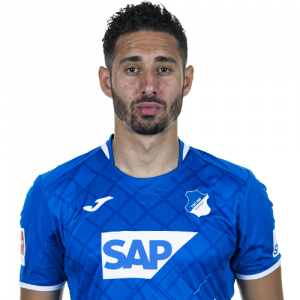 Ishak Belfodil (born 12 January 1992) is an Algerian footballer who plays as a striker for 1899 Hoffenheim and the Algeria national team.

A former France youth international, he was called up to the Algeria national team for the first time in August 2012.

In May 2018, it was announced that Belfodil would join 1899 Hoffenheim for the 2018–19 season having signed a contract until 2022 with the club. The transfer fee paid to Standard Liège was reported as €5.5 million.

On 9 February 2019 he scored back to back 2 goals in a stunning comeback against Dortmund in Bundesliga. Hoffenheim were lagging behind by 0-3, then he scored the first goal in 75 th and the equaliser in 87 th minute to complete the comeback.