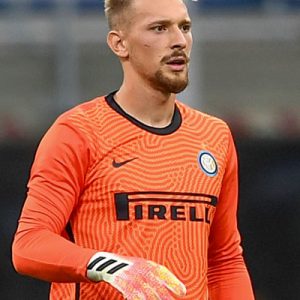 Andrei Ionuț Radu (born 28 May 1997), known as Andrei Radu or Ionuț Radu, is a Romanian professional footballer who plays as a goalkeeper for Italian club Internazionale and the Romania national team.

He began his professional career at Internazionale, but his senior output for the club consisted of only one match. In 2017, Radu was loaned to Avellino, and the following year he joined Genoa, also on loan but this time with an obligation to buy. In the summer of 2019, the Nerazzuri activated his buy-back clause before loaning him once more to Genoa and then to Parma.

Early career / Internazionale
Radu began playing football at age 8 with local Viitorul București, after his grandmother saw a newspaper announcement. He was transferred to FC Steaua București in 2008, and left the club for rival side Dinamo București three years later. At the beginning of 2013 he relocated to Italy, briefly joining Pergolettese before being signed by Internazionale in the mid-2013 and assigned to their junior squads.

On 14 May 2016, the last matchday of the Serie A season, Radu made his senior debut for Inter as a 72nd-minute substitute for Juan Pablo Carrizo in a 1–3 away defeat to Sassuolo. On 4 October, he penned a new four-year deal with the Nerazzurri which would run until June 2020.

Radu agreed to a one-year loan with second division side Avellino with the option to make the move permanent on 15 July 2017. He made his debut in the second round of the Coppa Italia, a 1–0 home win over Matera, on 6 August. One week later, Radu played in the third round of the same competition, a 3–1 away defeat to Hellas Verona. On 18 September, he made his Serie B debut for Avellino in a 1–1 home draw with Venezia. On 24 October, he kept his first clean sheet in a 1–0 home win over Pro Vercelli. Radu ended his loan with the Biancoverdi with 24 appearances, 5 clean sheets and 30 goals conceded.

Genoa
On 29 June 2018, 21-year-old Radu was loaned to Genoa with an obligation to join the club permanently at the start of the following season. Genoa Chairman Enrico Preziosi claimed the subsequent transfer fee was €9 million, which made him the most expensive Romanian goalkeeper. However, according to the financial report of Internazionale, the fee was €8 million. The deal also reportedly included an undisclosed buy-back clause.

After Federico Marchetti was used as a starter in the first four games of the Serie A season, Radu made his debut on 26 September against Chievo, managing to keep a clean sheet in the 2–0 victory. He was deemed at fault for several goals his team conceded in the next fixtures, including Cristiano Ronaldo’s opener in a 1–1 draw with Juventus on 20 October and Alessio Romagnoli’s late volley in a 1–2 loss to A.C. Milan on the 31st the same month; he was however backed up by manager Ivan Jurić, who blamed young age as the cause of his errors. On 3 November, he conceded five goals from his parent club Internazionale.

Radu was nominated for Gazeta Sporturilor’s 2018 Romanian Footballer of the Year award in late November. On 22 December, he saved one of the two penalty kicks awarded to Atalanta in a 3–1 home victory at the Stadio Luigi Ferraris. In January 2019, he was included by UEFA.com in a list of the 50 Best Young Footballers to watch for that year. In spite of being coached by three different managers throughout the season, Radu maintained his place as first-choice goalkeeper and amassed 33 league appearances.

In June 2019, as stipulated Genoa agreed to buy Radu for €8 million, but he was immediately redeemed by Internazionale for a reported €12 million. The deal was officially announced in July 2019, and at the same time he returned to Genoa on another loan.