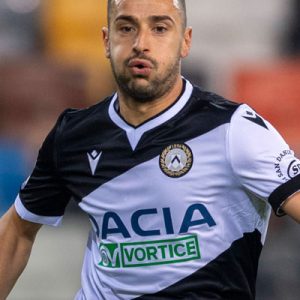 Ilija Nestorovski (born 12 March 1990) is a Macedonian professional footballer who plays as a forward for Serie A club Udinese, whom he captains, and the North Macedonia national football team.

Born in Prilep, SR Macedonia, Yugoslavia, Nestorovski started his career at hometown club FK Pobeda. Joining their youth academy in 2000, he made his senior debut in 2006. Between 2006 and 2010, he made 96 league appearances for Pobeda, scoring 39 goals.

In the early weeks of 2010, Nestorovski then moved to Czech First League side Slovácko. He made eleven appearances in the remaining matches of the season, scoring his first and only league goal for that campaign in a 3–1 win over Slavia Prague. The following season, he made seventeen appearances, once more scoring a single league goal.

Nestorovski then went out on loan to Viktoria Žižkov where he spent the first half of the 2011–12 season. He left the relegation battlers in January 2012 and moved to Metalurg Skopje, spending the next twelve months with the club.

After not playing a single game for almost six months, Nestorovski signed for Inter Zaprešić on 9 August 2013, initially on a loan deal. He had a breakout year, scoring 20 times in the Croatian Second Football League and twice in the Croatian Football Cup. He extended his loan deal for another twelve months with Inter over the summer. The following season, Nestorovski found even more success, netting 24 times in 27 league games as Inter were promoted to the Croatian First Football League. Inter then signed him on a permanent deal.

After scoring thirteen times in the first half of the 1. HNL, Nestorovski was signed by Italian Serie A side Palermo, but spent the remainder of the 2015–16 season with Inter. Inter received a transfer fee of €500,000 while the player signed a four-year contract, starting in July 2016. After a first season with eleven goals and three assists he was chosen as captain after deciding to remain in the relegating club of Palermo despite interests from clubs such as Fiorentina and Everton.

On 26 July 2019, Nestorovski signed with Udinese, after Palermo were excluded from Serie B.