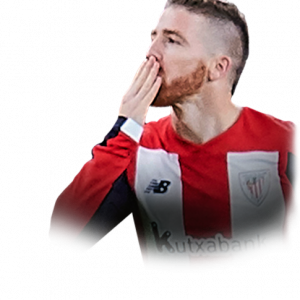 Iker Muniain Goñi (born 19 December 1992) is a Spanish footballer who plays for Athletic Bilbao, where he is captain, and the Spain national team, mainly as a left winger.

Due to his style of play and stature, he was dubbed “the Spanish Messi” by the media. He has spent all of his professional career with Athletic Bilbao after debuting in 2009 as their youngest player in a competitive match, making over 450 appearances for the club and reaching finals of the Copa del Rey four times, and the UEFA Europa League in 2012.

Muniain made 59 appearances for Spain at youth level, winning the European Under-21 Championship in 2011 and 2013. He also featured at the 2012 Olympics, in the same year as his senior international debut.

In early 2021, with the team playing a more attacking style under new coach Marcelino García Toral, Muniain recorded eight assists in three competitions between 17 January and 15 February (bettering his total for some entire seasons previously), including two in the Spanish Supercup final as his team won the trophy. During April of that year he took the field in the 2020 (delayed due to the COVID-19 pandemic) and 2021 Spanish Cup finals, both played in an empty Estadio de la Cartuja – the same venue as the Supercup win – due to the pandemic restrictions. Athletic lost the first match 1–0 to Real Sociedad, with Muniain breaking a footballing superstition before kick-off by touching the trophy (considered to be ‘bad luck’) but praised for his sportsmanship for staying on the pitch after the final whistle to applaud the winners. A pre-match injury doubt for the second final two weeks later, he stated to the press “Cups and trophies are not won or lost because one touches it or stops touching it. They are won on the field, and that is the only reality”, but this time it was noted he kept his hands well away from the prize; nevertheless his team were defeated 4–0 by Barcelona and he was withdrawn at half-time with the score at 0–0 and did not feature again that season, missing the last eight league fixtures.