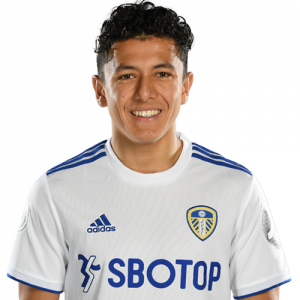 Ian Carlo Poveda-Ocampo (born 9 February 2000), sometimes known as Ian Carlo Poveda or Ian Poveda-Ocampo, is an English professional footballer who plays for Premier League club Leeds United and England U20s as a winger or as a attacking midfielder. He is a product of the Manchester City, Barcelona and Brentford academies and has been capped by England at youth level. He is also eligible to represent Colombia at international level.

Poveda started his career in the academy at Chelsea, where he was part of the same age group as Rhian Brewster and Reece James, before being poached by Arsenal and then Barcelona.Poveda was reported to have had a brief stint with Malaga-based side Puerto Malagueno between his stints at Arsenal and Barcelona, but didn’t play for, or even officially register, with them.

Brentford
Poveda joined the academy at Brentford during the 2014 off-season, having left Barcelona due to the club being prosecuted for signing minors illegally. He was a member of the U15 squad which finished as runners-up in the Junior Vase at the 2015 Milk Cup and progressed to make 15 appearances and score three goals for the youth team during the 2015–16 season, which also included three appearances for the Development Squad. Poveda departed Brentford in July 2016, due to the closure of the club’s academy.

Manchester City
On 18 July 2016, Poveda joined the academy at Premier League club Manchester City for an undisclosed fee and commenced a two-year scholarship. He was a member of the U18 team which finished as runners-up to Chelsea in the 2016–17 FA Youth Cup.

Leeds United
On 24 January 2020, Poveda signed for Leeds United on a four-and-a-half year contract until the end of the 2023–24 season for an undisclosed fee and was assigned the number 7 shirt, with Poveda revealing he was very excited to work under his new manager Marcelo Bielsa. He made his Leeds debut on 21 June 2020 as a second-half substitute in a 2–0 Championship defeat at Cardiff City.