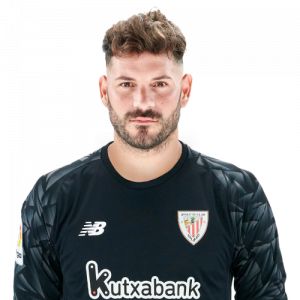 Iago Herrerín Buisán (born 25 January 1988) is a Spanish professional footballer who plays as a goalkeeper for Athletic Bilbao.

Herrerín returned to Athletic Bilbao in the summer of 2012, signing a two-year deal and immediately being loaned to CD Numancia in a season-long move. On 18 August he made his Segunda División debut, in a 2–0 home win against Sporting de Gijón.

In July 2013, Herrerín signed a new contract with the Lions and was definitively promoted to the main squad. On 23 August he played his first match in La Liga, keeping a clean sheet in a 2–0 victory over CA Osasuna at the Anoeta Stadium.He spent his first year, however, as backup to longtime incumbent Gorka Iraizoz.

Herrerín was first choice in the Copa del Rey in the 2014–15 campaign, helping his team reach the final of the tournament for the first time in three years. On 25 May 2015 he signed a new deal with the club, running until 2017.

In 2015–16, Herrerín played both domestic cup and UEFA Europa League games while appearing twice in the league during Iraizoz’ red card suspension. On 8 June 2016, he agreed to an extension until 2019.

On 30 November 2016, after being overtaken by Kepa Arrizabalaga, Herrerín was loaned to fellow top-tier side CD Leganés until the end of the season, mainly as a replacement for injured Jon Ander Serantes. On 19 January 2018, already back at Athletic and during a domestic league fixture away to Getafe CF, he conceded two penalties by tripping opposing forwards, saving the second kick in an eventual 2–2 draw. The previous week, he had signed a new contract until 2021.

On 7 January 2019, in a league match away to RC Celta de Vigo, a long kick upfield by Herrerín (now the first-choice goalkeeper following Arrizabalaga’s departure to Chelsea) was collected by Iñaki Williams who ran on to score, making the former the first goalkeeper to register an assist in La Liga in the 21st century.