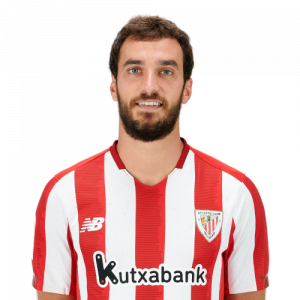 Iñigo Lekue Martínez (born 4 May 1993) is a Spanish professional footballer who plays for Athletic Bilbao mainly as a right-back.

Born in Bilbao, Biscay, Basque Country, Lekue graduated from Danok Bat CF’s youth system. In summer 2012 he moved to Athletic Bilbao, and made his debut as a senior with the farm team in Tercera División.

Lekue made his official debut with the first team on 15 August 2015, coming on as a second-half substitute for fellow youth graduate Sabin Merino in a 4–0 home rout of FC Barcelona for the Supercopa de España. He made his first league appearance 15 days later, being taken off at half-time in a 2–0 loss at neighbouring SD Eibar.

Lekue scored his first senior goal on 21 December 2015, equalising for the reserves in a 1–1 home draw against CD Lugo. The following 3 April he scored for the first time in the top flight, opening a 1–1 draw with Granada CF at the San Mamés Stadium. On 8 June 2016, he agreed to a contract extension until 2019.

On 24 November 2016, Lekue netted his first European goal to win a UEFA Europa League group match 3–2 at home to U.S. Sassuolo. He missed most of the 2018–19 season with back issues, returning as a late substitute on 16 March in a 2–0 home win over Atlético Madrid.