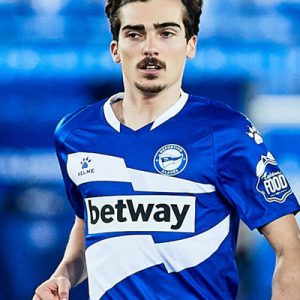 Born in Bilbao, Biscay, Basque Country, Córdoba joined Athletic Bilbao’s youth setup in 2009, aged 12. He made his debuts as a senior with the farm team in the 2014–15 campaign, in Tercera División.

In summer 2015, Córdoba spent the whole pre-season with the reserves, newly promoted to Segunda División. On 12 September of that year he made his professional debut aged 18, coming on as a late substitute for Aitor Seguín in a 0–1 away loss against Real Valladolid; he started seven of his 21 appearances in the second tier, and remained with the B-team after their relegation at the end of the season.

After a year as a regular starter in the third level, Córdoba signed a new contract until 2021, and was invited to train with the senior side in the 2017 pre-season. He made his first team – and La Liga – debut on 20 August, replacing Mikel Balenziaga in a 0–0 home draw against Getafe CF. He scored his first goal in a domestic league fixture away to Villarreal CF on 9 April 2018, the opener in a 3–1 victory for his team. Before the end of the season he signed an extension to his contract, including a buyout clause of upwards of €30 million, running until June 2022.

On 1 February 2021, Córdoba joined Deportivo Alavés on loan for the remainder of the 2020–21 season.