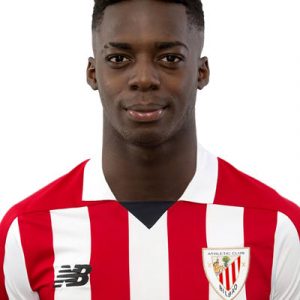 Iñaki Williams Arthuer (born 15 June 1994) is a Spanish professional footballer who plays as a forward for Athletic Bilbao.

On 6 December 2014, after profiting from Aritz Aduriz’s injury, Williams made his first-team – and La Liga – debut, starting in a 1–0 home loss against Córdoba. He netted his first goal on 19 February of the following year, starting and contributing to a 2–2 draw at Torino in the UEFA Europa League round of 32, becoming in the process the first black player to score for the club.

Williams signed a nine-year contract in August 2019, with his release clause set at €135 million. Late in the same month he started and scored in a 2–0 Basque derby win for his 122nd consecutive Spanish League game, setting a new record by an outfield player in the 21st century ahead of goalkeeper Diego López. On 24 November, he repeated the feat in a 2–1 away victory against Osasuna, breaking a 31–game undefeated streak of the hosts at their El Sadar Stadium; the occasion also marked his 133rd consecutive appearance in the Spanish top tier, establishing a new club record previously held by Carmelo Cedrún.

On 17 January 2021, Williams scored from 20 metres early into extra time of an eventual 3–2 win over Barcelona in the Spanish Supercup final.