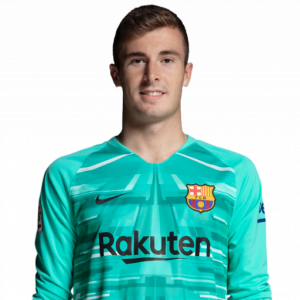 Ignacio “Iñaki” Peña Sotorres (born 2 March 1999) is a Spanish footballer who plays as a goalkeeper for Barcelona B.

Born in Alicante, Valencian Community, Peña started his career at Alicante CF’s youth setup in 2004, aged just five. In 2012, at the age of 13, he joined FC Barcelona’s La Masia from Villarreal CF. He was in the team that won the 2017–18 UEFA Youth League, being a starter in the final against Chelsea.

On 16 April 2018, Peña renewed his contract with Barça for three seasons, with an option for a further two. He was later promoted to the reserves in Segunda División B ahead of the 2018–19 season, and made his senior debut on 6 October 2018 by starting in a 1–1 home draw against CD Atlético Baleares.

On 30 October 2018, Peña was called up to the main squad for the first leg of round of 32 tie with Cultural Leonesa in the Copa del Rey as a backup to Jasper Cillessen, being an unused substitute in the 1–0 away win. He also appeared on the bench for some occasions during the season as Cillessen and starter Marc-André ter Stegen were out injured.

Peña once again featured on the bench for the main squad during the 2019–20 campaign, to cover for Neto’s absence due to injury.