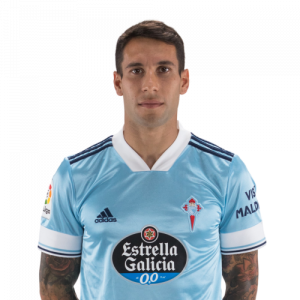 Hugo Mallo Novegil (born 22 June 1991) is a Spanish professional footballer who plays for and captains RC Celta de Vigo as a right back.

He has spent his entire career with Celta, making over 350 competitive appearances.

Born in Marín, Pontevedra, Galicia, Mallo played youth football for three local clubs, finishing his development with RC Celta de Vigo. He was immediately inserted in the first-team setup, appearing in 25 Segunda División games in his first season, starting with a 2–1 home loss against CD Numancia on 29 August 2009 in which he came on as a half-time substitute for Roberto Lago. The following 3 April, again from the bench, he was sent off for conceding a penalty kick with a foul on Juan Domínguez which resulted in the only goal of Real Unión’s visit to Balaídos.

On 16 October 2010, Mallo scored his first career goal in a 2–2 draw at Villarreal CF B. He started in all 34 matches he appeared in the 2011–12 campaign, as the side finished second and returned to La Liga after five years; he made his debut in the competition on 18 August 2012, in a 0–1 home defeat to Málaga CF.

On 9 January 2013, during a 0–4 Copa del Rey loss at Real Madrid (2–5 on aggregate), Mallo – who was not being challenged – suffered an anterior cruciate ligament to his left knee, going on to be sidelined for the rest of the season. He scored his first top-flight goal on 23 May 2015 in the last game of the season, opening the team’s account in a 3–2 home win over RCD Espanyol.

Mallo scored in the Galician derby on 23 October 2016, setting Celta up for a 4–1 victory against local rivals Deportivo de La Coruña. He added 12 appearances in a run to the semi-finals of the UEFA Europa League, his debut continental campaign; in the second leg of the last 16, he scored in a 2–0 away defeat of Russia’s FC Krasnodar (4–1 aggregate).

On 5 May 2018, Mallo made his 300th competitive appearance in another local derby, putting him sixth in their all-time veterans. That August, he turned down a move to Premier League newcomers Fulham, instead signing a new five-year contract with a buyout clause of €50 million. On 24 November 2019 he moved joint-fourth on the list with a 350th appearance at Villarreal CF, and at 28 he became the youngest player to reach that figure for the club.