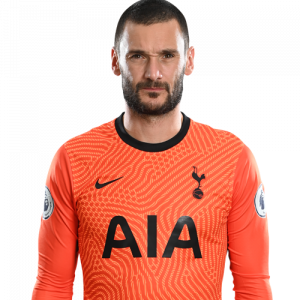 Hugo Hadrien Dominique Lloris (born 26 December 1986) is a French professional footballer who plays as a goalkeeper and captains both Premier League club Tottenham Hotspur and the France national team. He is a three-time winner of the National Union of Professional Footballers (UNFP) Ligue 1 Goalkeeper of the Year award. He is widely regarded as one of the best goalkeepers in the world due to his quick reflexes and being a formidable opponent in one-on-one situations.

Lloris began his career with hometown club OGC Nice, made his debut as a teenager in October 2005 and started in goal during the team’s run to the 2006 Coupe de la Ligue Final. After excelling at the club for three seasons, Lloris moved to seven-time Ligue 1 champions Olympique Lyonnais, amid interest from several other clubs, notably Milan. Lloris won several domestic awards in his first season with Lyon and, in his second season, earned award nominations at European level for his performances in the UEFA Champions League, which saw Lyon reach the semi-finals for the first time. He joined Tottenham in 2012, and helped the team reach the Champions League final in 2019.

Lloris is a French international having represented his nation at under-18, under-19, and under-21 level. Prior to playing at senior level, he played on the under-19 team that won the 2005 UEFA European Under-19 Championship. Lloris made his senior international debut in November 2008 in a friendly against Uruguay. He helped France qualify for the 2010 FIFA World Cup and was applauded by the media for his performance over two legs against the Republic of Ireland in the qualifying playoffs. He captained the national team for the first time in 2010, and became first-choice captain on 28 February 2012, leading France into the quarter-finals of both Euro 2012 and the 2014 FIFA World Cup, runners-up at Euro 2016, and winners at the 2018 FIFA World Cup held in Russia.