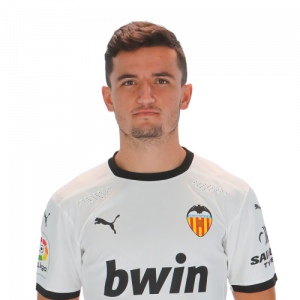 Hugo Guillamón Sanmartín (born 31 January 2000) is a Spanish professional footballer who plays for Valencia CF as a central defender.

Born in San Sebastián, Gipuzkoa, Basque Country, Guillamón moved to L’Eliana, Valencian Community at the age of two. He made his senior debut with the reserves on 16 December 2017, coming on as a first-half substitute for Ivan Zotko in a 0–0 Segunda División B home draw against CF Badalona.

On 23 December 2017, Guillamón renewed his contract with the Che until 2020. The following 27 October he scored his first senior goal, netting the opener in a 2–3 home loss against CD Alcoyano.

Guillamón made his first team – and La Liga – debut on 22 February 2020, replacing injured Eliaquim Mangala at half-time in a 3–0 defeat away to Real Sociedad. On 22 July, he renewed his contract until 2023, being definitely promoted to the main squad.