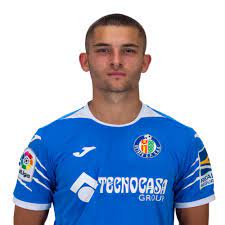 Hugo Duro Perales (born 10 November 1999) is a Spanish footballer who plays as a striker for Real Madrid Castilla, on loan from Getafe.

Duro joined Getafe’s youth setup in 2004, aged five. On 24 October 2017, before even appearing with the reserves, he made his professional debut by coming on as a second-half substitute for Chuli in a 0–1 home loss against Deportivo Alavés, for the season’s Copa del Rey.

Duro first appeared with the B-side on 29 October 2017, replacing Carlos Calderón in a 2–1 Tercera División away win against El Álamo. He scored his first senior goals on 19 November, netting a brace in a 3–0 home win against Santa Ana.

Duro made his La Liga debut on 17 March 2018, replacing Jorge Molina in a 2–1 away win against Real Sociedad. He scored his first goal in the category on 8 July 2020, netting his team’s only in a 1–3 home loss against Villarreal.

On 27 August 2020, Duro signed for Real Madrid on a season-long loan deal with option to buy, being initially assigned to the reserves in Segunda División B.

On 20 February 2021, Duro made his debut for the first team against Real Valladolid. His Champions League debut came on 24 February 2021 as a substitute, in a 1–0 victory over Atalanta.