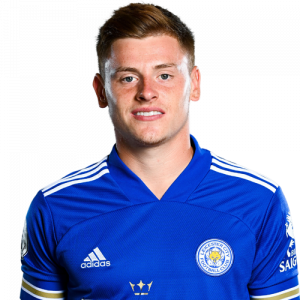 Harvey Lewis Barnes (born 9 December 1997) is an English professional footballer who plays as a winger for Premier League club Leicester City and the England national team.

Leicester City
Youth career
Barnes is a product of the Leicester City academy, which he joined at the age of nine. He signed his first professional contract with the club on 25 June 2016 and on 7 December 2016 made his debut for the first team as a second-half substitute in a 5–0 UEFA Champions League defeat to Porto. During the first half of the 2016–17 Premier League 2 season for Leicester City U23, Barnes scored five goals and provided assists for five others.

Loan to Milton Keynes Dons
On 20 January 2017, Barnes joined League One club Milton Keynes Dons on loan for the remainder of the 2016–17 season. A day later, Barnes scored on his home debut as a 76th-minute substitute for Chuks Aneke in a 5–3 win over Northampton Town. Barnes followed his debut goal with another goal a week later, on 28 January, scoring in a 4–0 away win over rivals Peterborough United.

Loan to Barnsley and recall
On 11 August 2017, Barnes joined Championship club Barnsley on a season-long loan. The following day, he made his debut for the club as an 80th-minute substitute in a 1–2 home defeat to Ipswich Town. He scored his first goal for Barnsley against Sunderland on 26 August 2017.

On 1 January 2018, Barnes was recalled from his loan spell at Barnsley and returned to Leicester City.

He made his Premier League debut on 19 April 2018, as a 91st minute substitute in a 0–0 draw against Southampton.

Loan to West Bromwich Albion
In July 2018, after originally agreeing a deal to join Leeds United on loan, Barnes changed his mind at the last moment and on 24 July 2018, Barnes signed a new four-year contract with Leicester and joined newly relegated Championship club West Bromwich Albion on a season long loan. He scored a spectacular goal on his league debut during a 2–1 home defeat against Bolton Wanderers on 4 August 2018.

Return to Leicester City
On 11 January 2019, Barnes was recalled by Leicester with immediate effect. He scored his first goal for Leicester on 20 April in a 2–2 draw with West Ham United. In June he signed a new five-year contract. On 24 August 2019, Barnes scored a half-volley against Sheffield United to give Leicester City the victory. That stunning strike was later voted as Premier League Goal of the Month.

He scored again for Leicester’s opener on 19 January 2020, but he was on the losing side as his team lost 2–1 to Burnley at Turf Moor. On 9 March, Barnes notched a brace in a comprehensive 4–0 home victory over struggling Aston Villa.