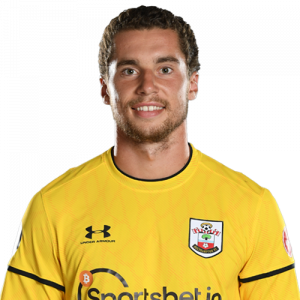 Harry Charles John Lewis (born 20 December 1997) is an English professional footballer who plays as a goalkeeper for Southampton.

Lewis joined Southampton’s academy from Shrewsbury Town in 2015. After impressing with the under-23 side, Lewis made his professional debut for Southampton on 7 January 2017 against Norwich City in an FA Cup match. He conceded a penalty in the match as Southampton drew 2–2 at Carrow Road.

On 14 July 2017, he joined Scottish Championship club Dundee United on a one-year loan, having also signed a new three-year contract with Southampton. Five days later, he made his debut in a 3–0 win at Highland Football League club Buckie Thistle in the Scottish League Cup. He made 39 appearances in all competitions as Dundee United came third in the league and were eliminated 4–3 on aggregate by Livingston in the play-off semi-finals.

Lewis has represented England at under-18 level. On 24 September 2014, he came on to the field to make his England U18s debut, replacing goalkeeper and captain Freddie Woodman in a 2–0 friendly defeat away to Italy at the Stadio Giovanni Chiggiato.