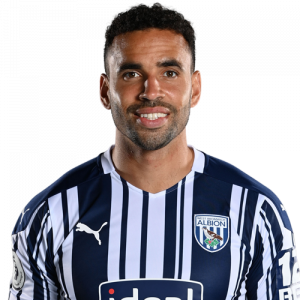 Thomas Henry Alex “Hal” Robson-Kanu (born 21 May 1989) is a professional footballer who plays as a winger for West Bromwich Albion and the Wales national team.

Although he initially played primarily on the wing, he has also been used as a forward, including during Wales’ run to the semi-finals of UEFA Euro 2016.

Robson-Kanu started his career as a schoolboy at Arsenal but was released at 15 and joined Reading. After graduating from the academy in 2007 he spent time on loan at Southend United and Swindon Town before returning to Reading and making his first team debut in 2009. Limited to mainly substitute appearances during his first season, he became an important member of the squad appearing regularly during the 2011–12 Championship winning campaign. He made his Premier League debut in 2012 and went on to score 30 goals in 228 games for the club before his release in 2016. He then signed for West Bromwich Albion.

At international level Robson-Kanu initially represented the country of his birth, England, at under-19 and under-20 level. In 2010, he switched allegiance to Wales, the country of his grandmother, playing for the under-21 side before his debut for the senior team against Croatia on 23 May that year. Robson-Kanu was selected to represent Wales at UEFA Euro 2016, where they made the semi-finals.