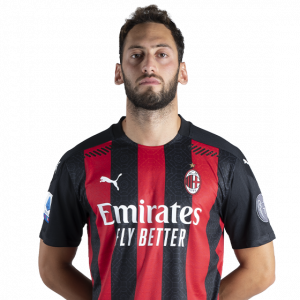 Hakan Çalhanoğlu (born 8 February 1994) is a Turkish professional footballer who plays as an attacking midfielder for Serie A club Milan and the Turkish national team.

He began his career at Karlsruher SC in 2010 and moved to top-flight side Hamburger SV two years later, spending another season back at his first club on loan. His performance in his first Bundesliga season earned him a €14.5 million transfer to Bayer 04 Leverkusen in 2014. He played for three seasons at the BayArena, totalling 28 goals in 115 official appearances. In 2017, he signed for Milan for an initial €20 million fee.

Born in Germany, Çalhanoğlu opted to represent Turkey at international level, from under-16 level onwards. He made his senior debut in 2013 and was part of their squad at UEFA Euro 2016.

On 3 July 2017, Çalhanoğlu signed a four-year contract with Serie A club Milan. The fee was reported as an initial €20 million, rising to €24 million. He was assigned the club’s prestigious number 10 jersey, previously owned by the likes of Gianni Rivera, Ruud Gullit, Dejan Savićević, Zvonimir Boban, Rui Costa and Clarence Seedorf.

He made his Rossoneri competitive debut a month later in the second leg of the Europa League third qualifying round, replacing Suso for the final 25 minutes of a 2–0 win (3–0 aggregate) over Universitatea Craiova at the San Siro. He scored his first goal for Milan in a 5–1 away win against Austria Wien in the group stage on 14 September, also providing two assists. Domestically, Çalhanoğlu made his league debut on 20 August, playing the full 90 minutes of a 3–0 win at Crotone. He was sent off in a 2–0 home loss to Roma on 1 October, earning a second yellow card for a foul on Radja Nainggolan. Çalhanoğlu scored his first league goal on 25 October in a 4–1 win at Chievo, becoming the first Turk to net in Serie A since Emre Belözoğlu in 2003.