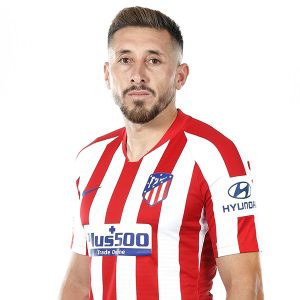 Herrera began his career with Pachuca in 2010 and spent three years at the club before joining FC Porto. He struggled for playing time in his first season in Portugal before gradually cementing his place in the starting eleven. Since the 2015–16 season, Herrera served as club captain. In his six years with Porto, Herrera made over 240 appearances across all competitions, winning a Primeira Liga title and two Supertaça cups.

A full international since 2012, Herrera won the Olympic gold medal in that year’s football tournament, and was part of Mexico’s winning team at the 2015 CONCACAF Gold Cup. He has represented his country at the 2014 and 2018 FIFA World Cup, the 2013 and 2017 FIFA Confederations Cup, and the Copa América Centenario.

Atlético Madrid
On 3 July 2019, Atlético Madrid announced via their website that they had reached an agreement with Herrera. He signed a three-year contract, and was officially presented at the Wanda Metropolitano with the number 16 shirt. After failing to appear for Los Rojiblancos in the first month of the season, he made his competitive debut on 18 September, coming on as a late substitute for Thomas Partey and scoring the equalizer in the 90th minute to salvage a 2–2 draw against Juventus in the opening group game of the UEFA Champions League. Three days later, Herrera made his debut in La Liga as a starter against Celta de Vigo, playing 60 minutes in a 0–0 draw.

On 1 December 2020, Herrera, with 47, surpassed Javier Hernández as the Mexican with most UEFA Champions League appearances, coming on as a substitute in a 1–1 group stage draw against Bayern Munich.