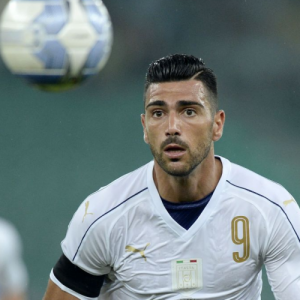 Graziano Pellè (born 15 July 1985) is an Italian professional footballer who plays as a striker for Serie A club Parma.

Pellè began his career at local Serie A club Lecce, and was loaned to three lower-division sides before moving to the Dutch club AZ in 2007. He won the Eredivisie title in his second of four seasons at the club. After brief spells back in Italy with Parma and Sampdoria, he returned to the Dutch top flight, where his consistent scoring for Feyenoord earned Pellè an £8 million transfer to Southampton in July 2014. In July 2016, after two seasons in the Premier League, Pellè moved to Shandong Luneng for an estimated transfer fee of £12 million.

Return to Parma
On 5 February 2021, Pellè agreed to a return to Parma on a six-month deal. On 19 March 2021, almost 10 years later, Pellé returns to scoring in Serie A and does so with a splendid overhead kick in Parma-Genoa.