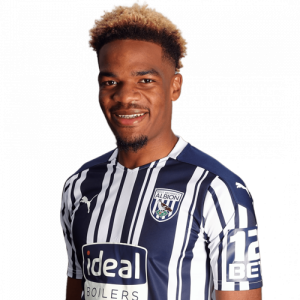 Grady George Diangana (born 19 April 1998) is a professional footballer who plays as an attacking midfielder for Premier League club West Bromwich Albion. He has previously played for West Ham United. Born in the Democratic Republic of the Congo, Diangana represents England at youth international level.

On 4 September 2020, West Bromwich Albion announced the signing of Diangana for an undisclosed fee on a five-year deal. The decision to sell him by West Ham chairman David Sullivan was controversial amongst both fans and players. West Ham club captain Mark Noble openly stated that he was “angry and sad that Grady has left” in a comment which gathered support from fellow players including Declan Rice and Jack Wilshere.

Diangana scored his first Premier League goal in a 5–2 defeat to Everton. It was a long-range solo effort from 20 yards out which beat Jordan Pickford into the bottom right hand corner. Despite a difficult start to the season for West Brom, Diangana was a regular starter on the left flank under manager Slaven Bilić.

Diangana generally plays as a right-sided attacking midfielder but can play across the forward line. He cites Ronaldinho as an influence.