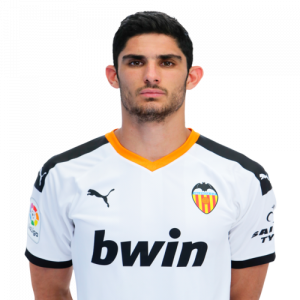 Gonçalo Manuel Ganchinho Guedes (born 29 November 1996) is a Portuguese footballer who plays as a winger, and occasionally as a second striker, for La Liga side Valencia and the Portugal national team.

Guedes began his career at Benfica, making his professional debut for the reserves in April 2014 and the first team six months later. After 11 goals in 63 matches across all competitions, winning five major trophies, he transferred to Paris Saint-Germain for a €30 million transfer fee in January 2017. He played only 13 matches for PSG before being loaned to Valencia in September 2017. In August 2018, he joined Valencia on a permanent basis for a €40 million transfer fee.

Guedes earned 57 caps for Portugal at youth level, from under-15 to under-23. He made his senior international debut in November 2015, at age 18, and played at the 2018 FIFA World Cup. He scored the winning goal for Portugal in the 2019 UEFA Nations League Final.

On 1 September 2017, Guedes was loaned to Spanish club Valencia on a season-long deal. The transfer was facilitated by the contacts between his agent Jorge Mendes and the owners of Valencia.

Guedes made his La Liga debut eight days later, replacing Andreas Pereira for the final half hour of a goalless home draw against Atlético Madrid. On 15 October, Guedes scored the first goal of his loan in a 6–3 win at Real Betis, as his unbeaten team rose to second above Real Madrid. Six days later, he scored twice and assisted Santi Mina in a 4–0 win over Sevilla, the Che team’s fifth consecutive victory. He received plaudits from the international sporting press for his early-season form.

After rejecting offers from Premier League teams, on 27 August 2018, Valencia and PSG reached an agreement for the former to sign Guedes for a €40 million transfer fee. He played in the 2019 Copa del Rey Final on 25 May, with Valencia defeating Barcelona 2–1 to win the club’s first honour in 11 years.