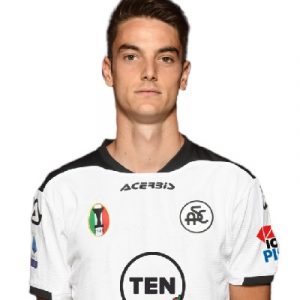 Giulio Maggiore (born 12 March 1998) is an Italian professional footballer who plays as a midfielder for Serie A club Spezia.

After signing his first professional contract on 8 April 2016, in the summer of the same year he was added to the first team led by Mr. Di Carlo. He made his Serie B debut on 20 September 2016, at the age of 18, in the away match in Trapani, entering the second half on 35 ‘. The following day comes his debut in the home stadium, against Novara on September 24, while on November 13 he plays his first game as a starter, against Bari (1-1). He made his debut in the Italian Cup on 10 January 2017, starting at San Paolo against Napoli (3-1), a match valid for the round of 16.

In the following season it improves compared to the previous one both in terms of appearances (thirty, of which twenty-four as a starter) and in terms of goals scored, with three goals to his credit, scored, in order, against Pescara, Virtus Entella and Cremonese, resulting in decisive in the last two races mentioned as both won by one to zero.

In September 2018 he renews his contract with the Aquilotta company until June 2023. In his third season in Serie B he scored his first league goal on 29 September, in the home match against Carpi; with this goal he allowed the Ligurians to beat Carpi for the first time in their history. On 1 May 2019 he scored his first double in the professionals, in the away match in Palermo (2-2).

Confirmed for the fourth season of Serie B, on 26 January 2020, on the occasion of the Crotone-Spezia match, he reaches the milestone of 100 appearances with the shirt of Spezia. On 1 February 2020, in the Spezia-Pordenone match, he crowns the dream of wearing the captain’s armband. Having finished third in the league, Spezia reached their historic promotion to Serie A by winning the play-offs in the final on 20 August against Frosinone.