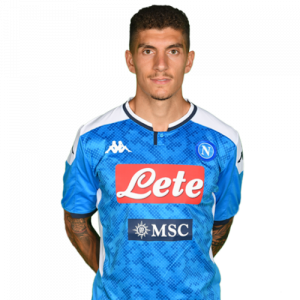 Giovanni Di Lorenzo (born 4 August 1993) is an Italian professional footballer who plays as a right-back for Serie A club Napoli and the Italy national team.

International career
Di Lorenzo has represented at U20 and U21 youth levels.

On 14 August 2013, Di Lorenzo made his debut with the Italy U21 national team under the guidance of coach and former Italian International footballer Luigi Di Biagio in a friendly match against Slovakia which Italy went on to win 4–1.

He made his senior international debut on 15 October 2019, playing as a starter in a 5–0 away win against Liechtenstein, in a UEFA Euro 2020 qualifying match.

Personal life
Di Lorenzo was born in Castelnuovo di Garfagnana to parents from Campania, South Italy, and he started his career as a striker and was nicknamed by his friends “Batigol” in honor of Argentine forward Gabriel Omar Batistuta for his goal-scoring ability but later switched to playing in more defensive roles.