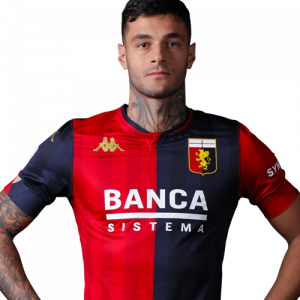 Gianluca Scamacca (born 1 January 1999) is an Italian professional footballer who plays as a striker for Serie A club Genoa, on loan from Sassuolo.

Youth and early career
A product of Roma youth academy, Scamacca joined PSV Eindhoven in January 2015. He made his professional debut in Eerste Divisie as a Jong PSV player on 22 January 2016, aged 17, in a 1–2 away win against VVV-Venlo, replacing Steven Bergwijn after 61 minutes.

Sassuolo
In January 2017, he was sold to Italian club Sassuolo. On 29 October, at age 18, he made his Serie A debut in a 3–1 loss against Napoli at the Stadio San Paolo.

Loans to Cremonese, PEC Zwolle, Ascoli and Genoa
In January 2018, Scamacca joined Serie B club Cremonese on loan. He scored his first professional goal on 14 April 2018, in the league match against Palermo.

On 31 August 2018, Scamacca joined Eredivisie club PEC Zwolle on loan. He made his debut on 2 September 2018 in the away league match won 1–0 against FC Groningen.

On 2 October 2020, Scamacca joined Genoa in the Serie A on a season-long loan.