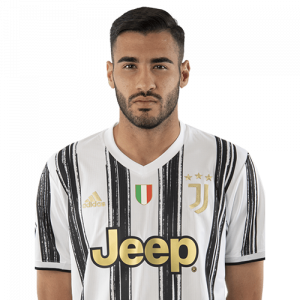 Gianluca Frabotta (born 24 June 1999) is an Italian professional footballer who plays as a left-back for Serie A club Juventus.

Coming through the youth system, Frabotta began his career at Bologna, who loaned him to Renate in 2018 and Pordenone in 2019. He joined Juventus in 2019, playing for their second team Juventus U23, before being made part of the first team in 2020.

Frabotta has represented Italy at youth level since 2017.

On 6 August 2019, Frabotta joined to Serie C club Juventus U23. He made his professional senior debut for Juventus, as well as his Serie A debut, on 1 August 2020, in a 3–1 home defeat to Roma.[ On 20 September, in Juventus’s opening match of the 2020–21 season, Frabotta played as a starter against Sampdoria; Juventus won 3–0 at home. On 4 November, he made his UEFA Champions League debut, coming on as a second–half substitute for Juan Cuadrado in a 4–1 away win over Ferencváros in the group stage. Frabotta scored his first goal for Juventus on 27 January 2021, scoring his team’s second goal in a 4–0 Coppa Italia win over SPAL in the quarter-finals.