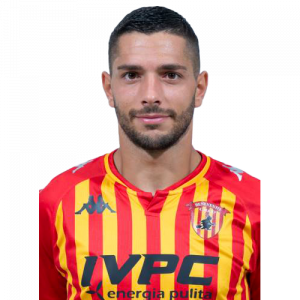 Gianluca Caprari (born 30 July 1993) is an Italian professional footballer who plays as a forward for Serie A club Benevento on loan from Sampdoria.

Roma
Born in Rome, Italian capital, Caprari started his career at Atletico 2000. He then joined esordienti team of A.S. Roma in 2003. He played for Roma’s Allievi Nazionali team at 2010 Torneo Città di Arco, which beat Fiorentina in the final.

Caprari made his first team debut on 8 March 2011, in 2010–11 UEFA Champions League round of 16. He replaced Simone Perrotta in the last minute; his team lost to Shakhtar Donetsk with a 0–3 score.

In the next season he played both legs of the 2011–12 UEFA Europa League play-off round, losing to Slovan Bratislava. He played only one match in Serie A in 2011–12 season, substituting Totti in a 2–0 win over Chievo.

Pescara
In January 2012, Caprari was sent on loan to Serie B club Pescara in order to allow him to play more first-team football. He scored three goals in 15 matches in 2011–12 season. The club also won promotion to Serie A.

In June 2012 Pescara purchased Caprari in a co-ownership deal for €1.2 million. On 20 June 2013, Roma re-signed him for €2 million by means of a player swap, with Giammario Piscitella and Matteo Politano moving to Pescara for €2 million. Caprari played his first match of his second Roma career on 10 November 2013, against Sassuolo coming on as a substitute.

On 24 January 2014, Caprari returned to Pescara by swapped clubs with Piscitella (both were tagged for €1.5 million)

Inter and Sampdoria
On 8 July 2016, Caprari was sold to F.C. Internazionale Milano. As part of the deal Cristiano Biraghi moved to Pescara. Caprari also returned to the Abruzzo region on loan.

Sampdoria
On 30 June 2017, Caprari joined fellow Serie A club Sampdoria. On 4 November 2019, Gianluca Caprari came off the bench to score the only goal and a stoppage-time winner for Sampdoria against SPAL.

Parma (loan)
On 31 January 2020, Caprari joined Parma on loan with an option to buy.