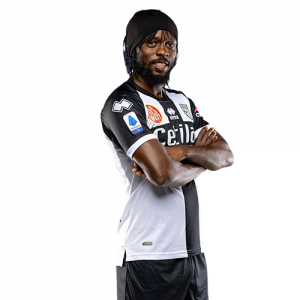 Gervais Yao Kouassi, better known as Gervinho, is a footballer who plays as a forward for Parma and the Ivory Coast national team.

Gervinho began his career at ASEC Abidjan and Toumodi, before moving to Belgium in 2004 to play for Beveren. Between 2007 and 2011, he played in the French Ligue 1, initially at Le Mans and then at Lille. In his final season in France, he helped his club win the league and the Coupe de France. He was sold to Arsenal in 2011 for £10.8 million and moved to Roma in 2013 for €8 million. In January 2016, Gervinho moved to Hebei China Fortune. In August 2018, he joined Parma Calcio 1913

Gervinho has made over 80 appearances for the Ivorian national team from his debut in 2007, scoring 23 goals. He was part of their squads at five Africa Cup of Nations tournaments and two World Cups.

On 17 August 2018, Gervinho returned to Serie A by signing for Parma Calcio 1913 alongside his former Roma teammate Salih Uçan. He made his Parma debut as a substitute in a 1–0 away loss to S.P.A.L. nine days later, and on 1 September he scored on his first start for the club, a 2–1 home defeat to reigning champions Juventus. Three weeks afterwards, he scored a “staggering goal” in a 2–0 home win over Cagliari by running with the ball up the whole pitch. In Serie A round 22, on 2 February 2019, he scored two goals to earn a draw for Parma against Juventus in final score 3–3.