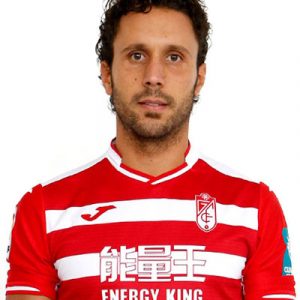 Germán Sánchez Barahona (born 12 December 1986), known simply as Germán, is a Spanish footballer who plays for Granada CF as a central defender.

Early years
Born in San Fernando, Cádiz, Andalusia, Germán started playing with UD San Fernando as a central midfielder, and made his senior debut with GE Bazán CF the following season. He first arrived in Segunda División B in 2008 with CD San Fernando, on loan from Cádiz CF.

Germán returned to the Estadio Ramón de Carranza in the summer of 2007, initially being assigned to the reserves in Tercera División but moving to the first team in June of the following year. After making no league appearances during the first half of the 2010–11 campaign, he moved to San Fernando CD on 31 January 2011. Always a starter, he helped the latter club win promotion to the third level in 2012, being converted to a central defender in the process.

On 19 June 2014, after suffering relegation, Germán signed a one-year deal with UE Olot. On 27 May 2015, he opted to not renew his contract at the division three side.

Tenerife
Germán joined CD Tenerife on 10 July 2015, after agreeing to a one-year contract. He made his Segunda División debut on 23 August at the age of 28, starting in a 3–6 away loss against CD Numancia.

Germán scored his first professional goal on 25 October 2015, a last-minute equaliser in a 2–2 home draw with CA Osasuna.

Granada
On 3 July 2017, Germán signed a two-year deal with Granada CF also of the second tier. In 2018–19, he contributed 38 matches and one goal as they returned to La Liga after a two-year absence, and subsequently agreed to an extension until 30 June 2021.

Germán’s maiden appearance in the competition took place on 17 August 2019, when he played the entire 4–4 draw at Villarreal CF.