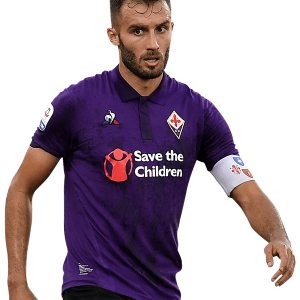 Germán Alejo Pezzella (born 27 June 1991) is an Argentine footballer who plays as a central defender for Serie A club Fiorentina, of which he is captain and the Argentina national team.

After impressing with the former’s reserves he was called up to the pre-season in Canada, appearing in friendlies against Toronto FC, Montreal Impact and Everton.

River Plate
After being an unused substitute in a 0–0 away draw against Club Atlético Huracán on 18 October 2009, Pezzella made his senior debut on 7 December 2011, starting in a 1–0 home win against Defensores de Belgrano for the season’s Copa Argentina. His league debut came on 2 March of the following year, where he played the full 90 minutes in a 0–0 home draw against Quilmes Atlético Club.

Pezzella scored his first professional goal on 2 September 2012, netting the last in a 1–1 draw at Club Atlético Colón. He also scored the equalizer in a 1–1 Superclásico home draw against Boca Juniors, just three minutes after coming off the bench.

On 10 December 2014, Pezzella scored the last in a 2014 Copa Sudamericana final 2–0 win against Atlético Nacional, as his side won its first international title after a 17-year absence.

Betis
On 10 July 2015, Pezzella signed a five-year contract with Real Betis, newly promoted to La Liga. He made his debut for the club on 23 August, starting in a 1–1 home draw against Villarreal CF.

Fiorentina
After a loan spell with Serie A club Fiorentina during the 2017–18 season, Pezzella signed a five-year contract with the club that runs through the end of the 2021–22 season for an €11m transfer fee. Ahead of the 2018–19 season, he was named the club’s new captain.