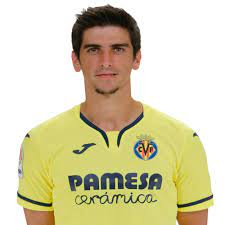 Gerard Moreno Balagueró (born 7 April 1992), simply known as Gerard, is a Spanish professional footballer who plays as a striker for La Liga club Villarreal and the Spain national team.

In his career, he has played for Villarreal, Mallorca and Espanyol, winning the 2021 Europa League and two Zarra Trophies with the first club.

Villarreal return
Gerard returned to Villarreal on 12 June 2018, agreeing to a five-year contract. Having retained 50% of the player’s rights previously, his former club paid Espanyol €20 million in the transfer to buy back the remaining 50% and acquire the player outright.

Gerard finished 2019–20 with 18 league goals, thus winning the Zarra Trophy. He renewed the accolade the following season with 23 and a team-best seven assists, scoring a further seven times in their victorious run in the UEFA Europa League.