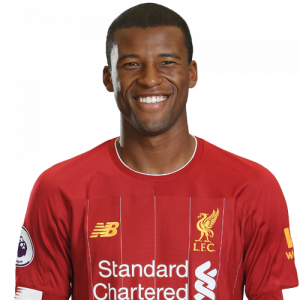 Georginio Gregion Emile Wijnaldum (born 11 November 1990) is a Dutch professional footballer who plays as a midfielder for Premier League club Liverpool and the Netherlands national team.

A youth product of Eredivisie side Feyenoord, Wijnaldum became the youngest player ever to represent the club when he made his debut in 2007, and went on to play 134 matches over the course of a five-year spell, winning the KNVB Cup in 2008. Following his departure from Feyenoord, Wijnaldum spent four seasons at PSV where he won the KNVB Cup in the first season and the Eredivisie in his last, a season where he also earned the Dutch Footballer of the Year award.

In 2015, Wijnaldum joined Premier League side Newcastle United for £14.5 million, before departing following the club’s relegation a year later to join Liverpool in a £23 million deal. At Liverpool, Wijnaldum took on a role deeper in the midfield than in his previous clubs. In the 2018–19 season, Wijnaldum scored twice against Barcelona in the Champions League semi-final second leg comeback as Liverpool went through 4–3 on aggregate, and he started as the club were victorious in the 2019 UEFA Champions League Final. In the following season, he played an integral role as Liverpool won the UEFA Super Cup, FIFA Club World Cup and Premier League, the club’s first league title in 30 years.

Wijnaldum is also a full Dutch international, having earned 70 caps since making his debut in 2011, and was a member of the squad which came third at the 2014 FIFA World Cup and second in the 2018–19 UEFA Nations League.