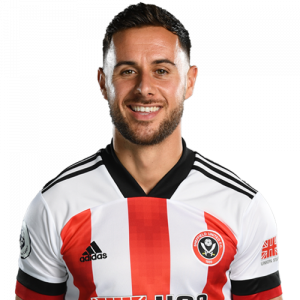 George Henry Ivor Baldock (born 9 March 1993) is an English professional footballer who plays as a right back for Premier League club Sheffield United.

On 29 July 2016, Baldock signed a contract extension with Milton Keynes Dons, keeping him at the club until the summer of 2018. On 26 November 2016, Baldock made his 100th appearance for the club in a 1–2 win away versus Coventry City.

On 13 June 2017, Baldock was reunited with former Oxford manager Chris Wilder when he joined newly promoted Championship club Sheffield United, on a three-year deal for an undisclosed fee. On 28 April 2019, Baldock saw the Blades secure promotion to the Premier League following a 12-year absence. On the 19 August 2019 Baldock signed a new 3-year contract at the club. On 12 December 2020, Baldock signed a new four-year deal with The Blades, keeping him at the club until 2024.