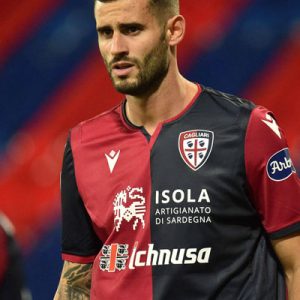 Gastón Rodrigo Pereiro López (born 11 June 1995) is a Uruguayan footballer who plays as an attacking midfielder for Italian Serie A club Cagliari Calcio and the Uruguay national team.

Pereiro grew from the youth system of Nacional. In April 2012, along with Diego Baldi, Leandro Otormín and Rodrigo Amaral, he traveled to England to participate in a ten-day training session at Liverpool.

On 28 January 2014, he made his official debut for Nacional in a Copa Libertadores match against Oriente Petrolero. Coach Gerardo Pelusso substituted him on in the 63rd minute replacing Carlos de Pena, they lost 1–0. Four days later, he scored his first goal in the 2–0 victory over Racing at the Estadio Centenario.

On 15 July 2015, Eredivisie side PSV Eindhoven confirmed the signing of Pereiro on a five-year deal. He was given the number 7 jersey, previously worn by Memphis Depay, and made his official debut in the Dutch Super Cup 2015, coming on as a substitute for Adam Maher. On 4 October 2015, Pereiro made his first start for PSV Eindhoven, scoring a brace in a 2–1 victory against arch-rival Ajax. Pereiro then scored his first hat-trick for the club on 27 October 2015, in a KNVB Cup fixture against Genemuiden.

He scored the first goal as PSV beat rivals Ajax 3–0 to clinch the 2017–18 Eredivisie title.