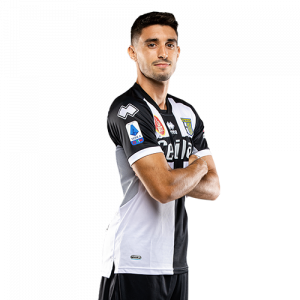 Gastón Brugman Duarte (born 7 September 1992) is a Uruguayan professional footballer who plays as a midfielder for Serie A club Parma Calcio 1913.

Early career
Born in Rosario, Uruguay, Brugman began playing football in Peñarol’s youth system. He moved to Italy to join Empoli in 2011. He made his debut in Empoli’s 0–1 defeat to Modena coming on as 58th-minute substitute replacing Riccardo Nardini.

Pescara and loans
In the summer of 2012 he moved to Serie A club Pescara. The following January he was sent on loan to Grosseto in Serie B. In the 2013–14 season, coach Pasquale Marino made him a regular starter at Pescara, who had been relegated to Serie B. Having further blossomed under coach Serse Cosmi Brugman’s play was likened to that of Andrea Pirlo and former Pescara player Marco Verratti. In the summer of 2014 he was close to a transfer to Villareal which, however, was cancelled due to a torn anterior cruciate ligament in his left knee.

Palermo
On 10 July 2015, he moved on loan to Serie A club Palermo, with a buyout clause.

Parma
On 1 August 2019, Serie A side Parma announced the signing of Brugman on a season long loan deal with an obligation to buy.