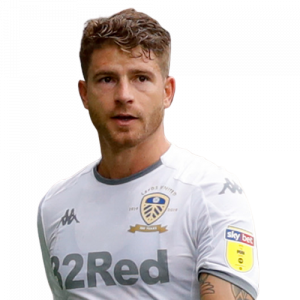 Gaetano Michel Berardi (born 21 August 1988) is a Swiss professional footballer who plays as a right-back for Premier League club Leeds United. Berardi can also operate at left-back and centre-back. He has been capped at international level by Switzerland.

Brescia
Berardi started his career at Swiss club Lugano’s youth team. In the summer of 2005, he was signed by Serie B side Brescia. Berardi made his professional debut on 30 June 2007, in a winning away game against Pescara (1–3).

In his first season, Berardi made ten appearances in all competitions under the management of Serse Cosmi. In the 2008–09 season, Berardi was used in 26 Serie B games. Before finally becoming a first team regular in Giuseppe Iachini team during the 2009–10 season, Brescia earned promotion to Serie A after beating Torino in the Serie B play-offs.

Berardi made his Serie A debut on 12 September 2010 in a 3–2 victory against Palermo. He made 26 starts in total for Brescia in Serie A, although Brescia were relegated at the end of the season after finishing in 19th position.

Sampdoria
On 12 January 2012, Berardi linked up with his former Brescia manager Giuseppe Iachini who signed him for Sampdoria. Berardi made his debut in a 2–1 victory against Padova on 14 January. At the end of the 2011–12 season, Berardi gained his second promotion to Serie A after winning the Serie B play-offs by beating Varese 4–2 on aggregate in the two-legged play-off final.

The following club season in Serie A, despite stiff competition from Italian international Lorenzo De Silvestri, Berardi made 21 appearances in Serie A during the 2012–13 season. However, after the club appointed Siniša Mihajlović as head coach in November 2013, Berardi lost his place in the starting lineup and only made five Serie A appearances during the subsequent 2013–14 season.

Leeds United
2014–15
On 19 July 2014, Leeds United announced that they had signed Berardi to a two-year deal for an undisclosed fee, with an option of a third year. Club president Massimo Cellino confirmed that Berardi had taken a wage cut to join Leeds. On 1 August, Berardi was assigned the number 12 shirt for the 2014–15 season.

Berardi made his Leeds debut on 12 August 2014, starting the League Cup match against Accrington Stanley. He was sent off on his debut for a straight red card. As a result of his red card, Berardi picked up a three-match ban, missing matches against Middlesbrough, Brighton & Hove Albion and Watford. With regular right back Sam Byram suspended, Berardi was set to start against Bradford City on 27 August, but was ruled out after picking up a concussion the day before the game. His full league debut was in a 1–1 draw away at Birmingham City on 13 September 2014.

On 20 September, Berardi received his second red card in just his fourth game, after being sent off in a 3–0 win over local rivals Huddersfield Town.

With regular left back Charlie Taylor pushed forward into an attacking left wing position, during 2015 Berardi became a regular fixture in the left-back position for Leeds. Berardi finished the season in strong form at left back, starting 10 of the last 11 games and becoming a fans’ favourite for his performances.

2015–16
Berardi was given the number 28 shirt for the 2015–16 season. On 21 September 2015, after becoming a highly popular player with the fans for his consistent displays at both right back or left back positions, Berardi signed a two-year contract extension with the club lasting until 2018.

On 21 November, Berardi received another straight red card for Leeds in a match against Rotherham United after being left with a bloodied nose by an elbow to the face from Leon Best) Berardi reacted angrily by pushing Best to the ground before being restrained by teammates. Best received a straight red The ban was later reduced after appeal due to the severity of the elbow Berardi received from Best, provoking the reaction.

After returning from suspension, on 14 December Berardi suffered a torn ankle ligament against Charlton Athletic which ruled him out for two months. After returning from injury, in April 2016, in the return fixture against Rotherham, Berardi – in similar circumstances to the reverse fixture – suffered a bloodied face/head injury after being elbowed by Rotherham striker Matt Derbyshire, which resulted Derbyshire being given a straight red, albeit in a 2–1 defeat for Leeds.

2016–17
Berardi missed the entirety of Leeds’ 2016–17 pre-season friendlies due to injury, although he did return to the substitutes’ bench for the final pre-season friendly against Italian side Atalanta. On 7 August, in the opening fixture of the season against Queens Park Rangers in a 3–0 defeat, Berardi was substituted early in the first half after picking up a hamstring injury. As a result of the hamstring injury, Berardi was ruled out for around 6 weeks.

On 26 October 2016, Berardi made his long-awaited return from injury for Leeds when he started in Leeds’ penalty shootout victory against Norwich City in the League Cup, after a dramatic 2–2 draw in normal time. However upon his return from injury, Berardi was kept out the side due to the impressive form of new right back Luke Ayling. After an Achilles injury to regular left back Charlie Taylor, on 29 December 2016 against Aston Villa, Berardi came into the side as a left back for a run of games. Berardi’s form at left back managed to keep out the returning Charlie Taylor for the remainder of the season.

2017–18
On 6 August 2017, Berardi suffered a dislocated shoulder in the 3–2 victory against Bolton Wanderers in the first game of the season, and had to be replaced by debutant Vurnon Anita in the first half. On 8 August, he signed a new three-year contract at the club, keeping him at Leeds until the end of the 2019–20 season.

On 30 December 2017, Berardi was named as captain and made his 100th appearance for Leeds in the 1–0 defeat against Birmingham City. On 7 January 2018, Berardi again captaining Leeds scored his first goal for the club and his first ever professional career goal with a long range strike against Newport County in the FA Cup.

On 7 April 2018, Berardi who was captaining the side, was sent off for a two footed lunge on Sunderland’s Callum McManaman, with the sending off being his third red card of the 2017–18 season, Berardi was given a 5 match ban, missing the final 5 games of the season. After missing 10 games combined through suspension for the 2017–18 season, on 16 April 2018, Berardi came out with a one off interview on LUTV to apologise to Leeds fans and his teammates for the red cards.

2018–19
Ahead of the 2018–19 season under new head coach Marcelo Bielsa, Berardi was training in a new position as a centre back, and used during pre-season in his new position. He started the season as first choice centre back alongside Liam Cooper, keeping Pontus Jansson on the bench, however Berardi was ruled out for a number of weeks after picking up a knee injury against Middlesbrough on 31 August.

After returning from injury after six weeks out injured, Berardi in only his second game back, picked up a separate serious injury on 24 October 2018 in a 2–0 win against Ipswich Town after suffering a hyperextention injury to the hamstring, which would rule Berardi out for several months. Rob Price Leeds’ Head of Medicine, revealed the seriousness of the injury by revealing Berardi had ‘tore his hamstring completely off the bone’.

During the 2018–19 Leeds United F.C. season, Berardi played 15 games in all competitions after an injury hit season, after Leeds finished the regular season in third place after dropping out of the automatic promotion places with 3 games left after a defeat to 10-man Wigan Athletic on 19 April, Leeds qualified for the playoffs, Berardi also started the Championship semi-final playoffs ahead of Pontus Jansson versus sixth-placed Derby County, Despite taking a 1–0 win at Pride Park, to bring into a 1–0 aggregate lead into the home leg at Elland Road, Leeds lost 2–4 in an encounter that saw Berardi sent off at a crucial moment in the game, after Berardi reacted by fouling Bradley Johnson after not being given a freekick. The red card helped proved costly, with Leeds losing on aggregate over 2 legs, and saw Derby progress to the final against Aston Villa 3–4 on aggregate.

2019–20
Berardi scored only the second goal of his career on 13 August in the EFL Cup tie against Salford City to help earn a 3–0 victory. He received his seventh red card for Leeds United against Millwall on 5 October, at the time making him the most red-carded player in Leeds United history. However, the controversial red card was overturned on appeal on 8 October.

After the English professional football season was paused in March 2020 due to Impact of the COVID-19 pandemic on association football, the season was resumed during June, where Berardi earned promotion with Leeds to the Premier League and also become the EFL Championship Champions for the 2019–20 season in July after the successful resumption of the season.

However, Berardi injured his Anterior cruciate ligament in the penultimate game of the season 3–1 victory against Derby County on 17 July 2020, the injury would be set to rule Berardi out for six to nine months.

2020–21
Having signed a short extension to remain with Leeds during Project Restart, Berardi’s contract ran out at the end of the 2019–20 season. However, he was allowed to remain at the club’s Thorp Arch training ground while completing his rehabilitation from the ACL injury, and on 16 October 2020 signed a new one-year contract for Leeds’ first season back in the Premier League.