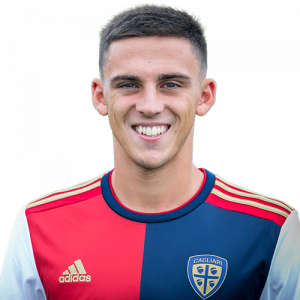 Gabriele Zappa (born 22 December 1999) is an Italian football player. He plays for Serie A club Cagliari, on loan from Pescara.

Inter
He was raised in the Inter youth teams and started playing soccer for their Under-19 squad in the 2016–17 season.

On 10 April 2018 he signed his first professional contract with the club.

He played several games for the senior squad in the Summer 2018 pre-season, including appearances at the 2018 International Champions Cup.

On 30 January 2019 Inter agreed on his transfer to Pescara, with Pescara loaning him back to Inter for the remainder of the 2018–19 season, and Inter holding a buy-back clause.

He was called-up for Inter’s senior squad competitive game for the first time on 14 March 2019 for the Europa League game against Eintracht Frankfurt, but remained on the bench.

Pescara
He joined Pescara on a previously agreed contract for the summer 2019 preseason.

He made his professional Serie B debut for Pescara on 24 September 2019 in a game against Cittadella. He substituted Antonio Balzano late in the first half after Balzano suffered a serious injury. He made his first Serie B start in the next game on 27 September 2019 against Crotone.

Cagliari
On 8 September 2020 he joined Serie A side Cagliari on loan from Pescara with an obligation to buy.