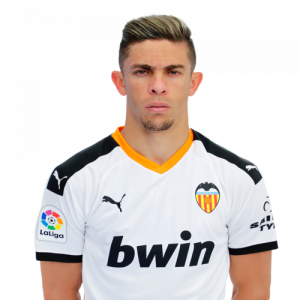 He began his career with Vitória in 2010, winning two Campeonato Baiano titles and finishing as runner-up in the 2010 Copa do Brasil. He also spent a season-and-a-half in Spain’s top flight with Villarreal before joining Arsenal in January 2015. In August 2017, Gabriel completed a move to Valencia.

Valencia
On 18 August 2017, Gabriel returned to Spain to join Valencia on a five-year contract. He made his debut on 9 September, in a 0–0 home draw against Atlético Madrid. On 20 January 2018 he was sent off for dissent in a 2–1 loss at UD Las Palmas, infuriating his manager Marcelino García Toral.

Gabriel played five games as Los Che won the 2018–19 Copa del Rey, including the 2–1 final win over Barcelona on 25 May; it was their first honour for eleven years. On 10 December 2019 he was sent off at the end of a 1–0 win at AFC Ajax in the last game of the Champions League group stage, for headbutting Dušan Tadić.