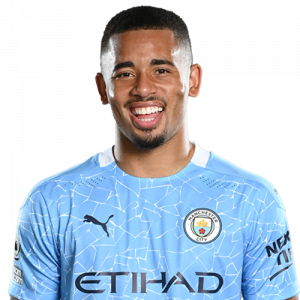 Jesus began his career at Palmeiras. He was voted the best newcomer of the 2015 Campeonato Brasileiro Série A, a year in which he also helped his team win the Copa do Brasil. The following year he was named the player of the season as Palmeiras won their first national league title in 22 years. He joined Manchester City in January 2017 for a transfer fee of €32 million, and won the Premier League in 2018 and 2019, the EFL Cup in 2018 and 2020, and the FA Cup in 2019.

After winning 21 caps and scoring seven goals at youth level, including reaching the final of the 2015 FIFA U-20 World Cup and winning an Olympic gold medal at the 2016 Summer Olympics, Jesus made his senior debut for Brazil in September 2016, and was part of the squad that took part at the 2018 FIFA World Cup, later also winning the 2019 Copa América.

On 3 August 2016, it was announced that Jesus would sign for Premier League club Manchester City in January 2017 on a contract until the summer of 2021. City paid a reported fee of £27 million/€33 million, plus add-ons. The transfer was fully completed on 19 January 2017.