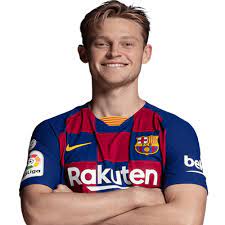 Frenkie de Jong (born 12 May 1997) is a Dutch professional footballer who plays as a midfielder for Spanish club Barcelona and the Netherlands national team.

A versatile midfielder, he is known for his strong defensive abilities.

De Jong began his professional career at Willem II in 2015. He transferred to Ajax for a fee worth €1 a year later. The fee was symbolic and offset by a sell-on clause. At Ajax he established himself as one of the best young midfielders in Europe, after winning a domestic double and reaching the Champions League semi-finals. De Jong won the Eredivisie and KNVB Cup, was Eredivisie player of the season, and was an instrumental part of Ajax’s first UEFA Champions League semi-final appearance in 22 years, in a breakthrough 2018–19 season.

During his breakthrough season, De Jong agreed to sign for Barcelona in January 2019, leading him to be signed for the club in July, for a fee worth €75 million. De Jong was selected to the 2019 FIFA FIFPro World11 and was one of three Dutch players to feature in it for the first time in five years.

De Jong made his senior international debut for the Netherlands in September 2018. He became a starter in the inaugural UEFA Nations League, in which Netherlands finished runners-up. He also represented the side at UEFA Euro 2020.

Barcelona
On 23 January 2019, La Liga club Barcelona announced the signing of de Jong on a five-year contract, effective from 1 July 2019, for an initial fee worth €75 million. He made his competitive debut on 16 August 2019, in a 0–1 opening day defeat to Athletic Bilbao. De Jong had transfer discussions with Paris Saint-Germain and Manchester City and Manchester United before ultimately opting for Barcelona.

De Jong has primarily played as a central midfielder. In his first 12 league appearances, he had scored and assisted, once each, in the same game — against Valencia on 14 September 2019, at Camp Nou. His first assist was to Ansu Fati in the 2nd minute with a low cross from the right. Fati then assisted for De Jong’s first goal, in the 7th minute, shooting from just outside the six-yard box from a low cross in from the left.

He played a crucial role in the 2021 Copa del Rey final, a 4–0 win over Athletic Bilbao, assisting Antoine Griezmann to score the opening goal in the 60th minute, scoring himself in the 63rd minute (having hit the post with a shot in the first half) and also assisting Lionel Messi’s 68th minute goal.